Mortgage Approvals Are Getting More And More Scarce 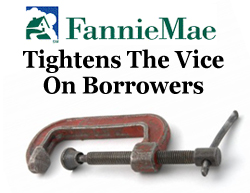 The economy's improving but lending standards are not. Nationally, banks are making mortgage approvals harder to come by. Underwriting guidelines are tightening. The data comes from the Federal Reserve's quarterly survey to its member banks.

The Fed asks senior bank loan officers around the country to report on 'prime' residential mortgage guidelines over the most recent 3 months and whether they've tightened. For the period October-December 2009:

Just 2 of 53 banks said its guidelines had loosened. Combine the Fed's survey with recent underwriting updates from  and generally tougher standards for conventional loans and it's clear that lenders are much more cautious about their loans than they were, say, in 2007. Today's Indianapolis home buyers and would-be refinancers face a bevy of new borrowing hurdles including:

So, if you're on the fence about whether now is a good time to buy a home, or make that refi, consider acting sooner rather than later.  It doesn't necessarily matter that mortgage rates are low, or that there's an up-to-$8,000 home purchase tax credit for households that qualify.  With each passing quarter, fewer and fewer applicants are eligible to take advantage.