How Interest Rate Affects the Purchasing Power of Buying A Home

If you locked in your interest rate on a home this past week, congratulations! The Indianapolis real estate market may not find better interest rates than we have right now. The current mortgage rates make buying a home in Indianpolis a better ... 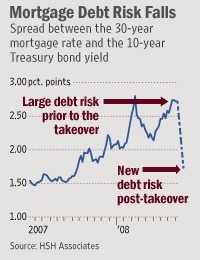 When comparing two investments with equal risk, a rational person will choose the investment with a higher rate of return. This behavior is called Risk Aversion and is a basic tenet of personal investing. An off-shoot of Risk Aversion is ...

Read More
Posted by Paula Henry on September 9, 2008 in Mortgage News and Info

As we get closer to Labor Day, volume on Wall Street is dwindling as market players get a head start on their long weekend. Today could be a difficult day to shop for mortgage rates and that can impact home affordabilility.  Expect ...

Read More
Posted by Paula Henry on September 1, 2008 in Mortgage News and Info

The 'Sheep Effect' On Your Housing Payment

A noon-hour, mortgage-bond rally rendered homes more affordable for Americans Tuesday. It was the second straight day on which this happened.  On both days, the action was swift. The speed at which Monday's and Tuesday's respective rallies tore ...

Read More
Posted by Paula Henry on July 8, 2008 in Mortgage News and Info

Are Sub-Prime Mortgage Problems Finally A Thing Of The Past?